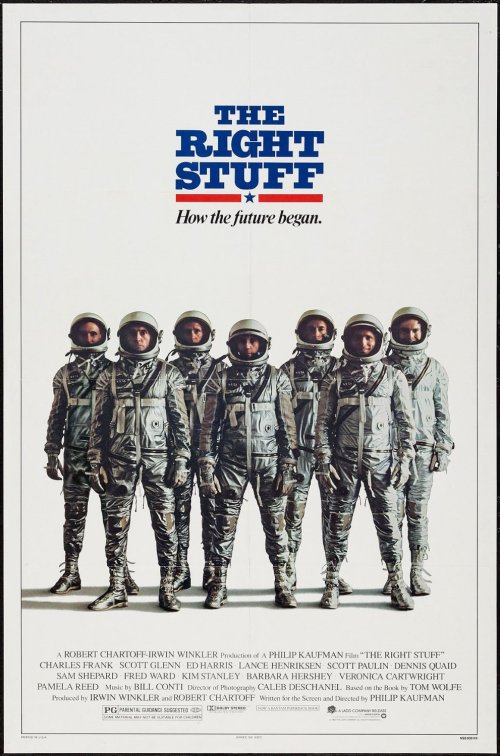 Based on the 1979 best-selling novel by Tom Wolfe, the film explores the history of the American space program starting in 1947 when test pilot Chuck Yeager (Sam Shepherd) successfully broke the sound barrier and then moving into the selection and training of the men who would lead the exploration into space culminating with John Glenn’s historic orbiting flight of the earth on February 20, 1962.

The film was a darling of the critics, but did poorly at the box office and I suspect this is due mainly to over reliance on comedy that eventually becomes off-putting. When doing a film dealing with historical events I don’t mind some comedy as real-life can always have its fair share of funny moments, but writer/director Philip Kaufman becomes obsessed with squeezing every ounce of humor that he can from each and every scene, sometimes even going off on tangents with it, until it seems like that’s more of the film’s focus. At the start there’s an okay blend, but then it gets out-of-control wacky, which creates a surreal world that seems to mock the events instead of tell them. The viewer also has to question whether the filmmaker’s, in their zeal to get a laugh in any way that they can, are really showing us something that is accurate or whether that was even a concern.

There’s also too many characters and they all possess the same clichéd all-American-fearless-good-ole’-boy charm that makes them indistinguishable from the other. The film should’ve had only one central character that the rest of the story revolved around. Supposedly the Chuck Yeager character (the actual Chuck Yeager appears briefly as a bartender) was supposed to do this by having him reappear throughout, but he is gone for so much of the time that you essentially forget about him.

This also becomes a problem when dealing with the story thread of Gus Grissom (Fred Ward) who supposedly ‘panics’ when his spacecraft splashes down. Because we never really get to know any of these characters on any deep level we have no clue why he behaves the way that he does. The scene where he supposedly explodes the hatch’s bolts, which in turn sinks the craft is disputed in its accuracy anyways, but it hurts the film’s pace either way. Spending virtually three hours being comical and then throwing in a highly dramatic element almost out of nowhere is jarring and then just as frustratingly it drops it without any suitable conclusion or exploration as to what might’ve really happened or why.

The production values are excellent, which is why I couldn’t hate it, but the movie also has tendency to one-up itself with each and every progressing scene and thus making John Glenn’s orbiting flight, which should’ve been the film’s highpoint, get lost in the shuffle. There’s also too much of a flag-waiving mentality that almost resembles a government produced propaganda film and helps give the movie an overblown, overreaching feeling when it’s over.

This entry was posted in 80's Movies, Comedy/Drama, Movies Based on Actual Events, Movies Based on Novels, Movies with a rural setting and tagged Chuck Yeager, Entertainment, Gus Grissom, Movies, Philip Kaufman, Review. Bookmark the permalink.