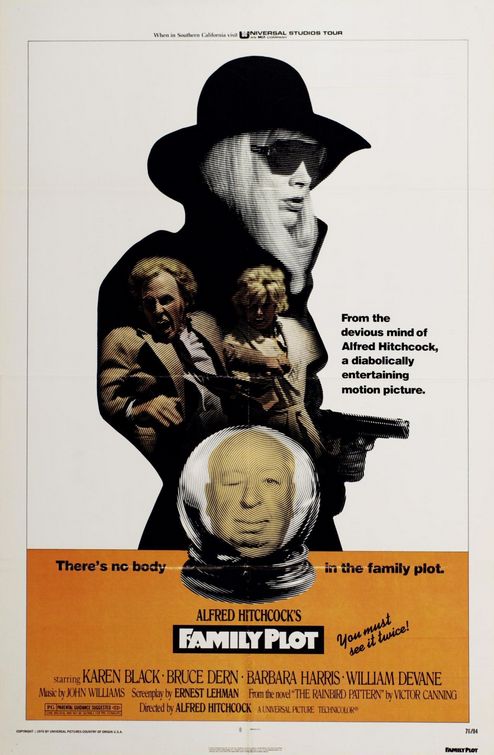 Blanche Tyler (Barbara Harris) is a phony psychic whose client, the rich heiress Julia Rainbird (Cathleen Nesbitt) offers her a reward of $10,000 if she can use her ‘psychic abilities’ to find Julia’s long-lost nephew who was given up for adoption years earlier. Blanche employs her boyfriend George (Bruce Dern) who works as a cabbie in-between acting gigs, to find the man. George ends up stumbling upon someone who he thinks may be him, Arthur Adamnson (William Devane), but ends up getting in-over-his-head when Arthur proves to have ulterior motives.

The film’s claim-to-fame is that it was the last one directed by Alfred Hitchcock, which is probably the only good thing to say about it. Technically it’s not bad, but it’s not terribly interesting either. Everything that gets done here has been done before in other films with more interesting results. This includes a sequence where Blanche and George’s car goes careening down a mountain highway with no breaks, which isn’t exciting at all and looks clearly shot in front of a green screen.

After completing the far edgier Frenzy I was expecting Hitch to try and push the envelope even more, but instead he draws back with a pedestrian story that’s full-of-holes.  It was based on the novel ‘The Rainbird Pattern’ written by Victor Canning, which had a darker tone. Screenwriter Ernest Lehman wanted to capture that same tone here, but Hitch pushed him instead for a lighter quality that borders on camp, but ultimately comes off as gimmicky. The ending is particularly limp and for someone once dubbed the ‘Master of Suspense’ there is very little of it here.

The only moment that stuck out for me is where Blanche and George sit down to eat hamburgers. Normally actors in films rarely eat the food that they’re served and will usually either take small nibbles, or simply leave it on the plate without taking a single bite, but here both Dern and Harris take big bites from their burgers while continuing to talk. At one point a piece of burger spits out of Dern’s mouth as he speaks and he instinctually holds up his hand in front of his mouth in an embarrassment, which was strangely left in. Most directors would’ve quickly stopped the scene and reshot it, but instead Hitch decided to let it continue, which adds an odd realism probably not seen anywhere else.

The casting is the only real bright spot especially Devane, who normally played good guys, but takes a turn as a villain here and does quite well. In fact it’s the best performance of his career. Unfortunately the two women (Harris and Karen Black who plays Devane’s girlfriend) are wasted and for the most part have very little to do. Black’s role could’ve been cut out completely in a film that especially when compared to the director’s earlier works is a huge disappointment.