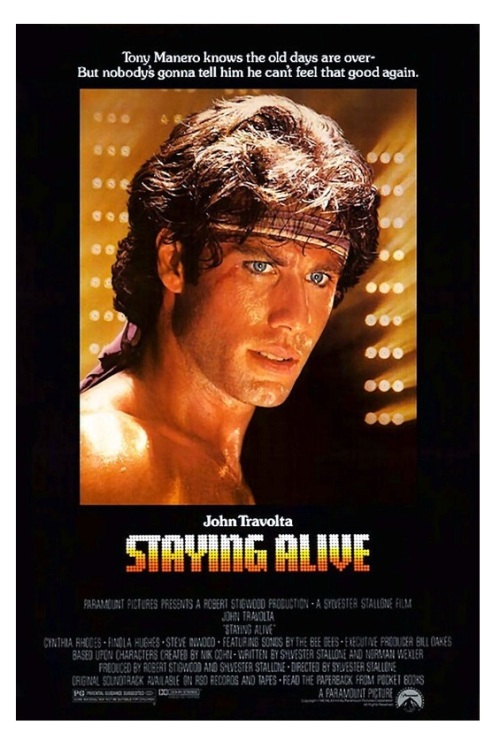 It’s been 5 years and Tony Manero (John Travolta) is still struggling to make it big in the dancing world in this sequel to Saturday Night Fever. Now instead of working at a paint store he’s employed as a nightclub waiter while spending his days desperately going to every agent in New York looking for a break, but getting none. He’s in a relationship with Jackie (Cynthia Rhodes), but when a hot new dancer named Laura (Finola Hughes) catches his eye he decides to have a fling with her, which further complicates the fact that all three of them are dancing in the Broadway production of ‘Satan’s Alley’.

The idea of turning a classic movie into a sequel should’ve been given the kibosh from the start as that film conveyed such a perfect slice-of-life tale that it didn’t need any continuing. This film also doesn’t have any of the key players from the first including Donna Pescow and Karen Lynn Gorney. It was Travolta’s and Gorney’s relationship that made that movie sizzle, so if you’re not going to have her then why even bother making it as it’s hollow and incomplete otherwise. Too much time had also elapsed and disco was no longer trendy by the early ‘80s, so to compensate they tried gearing it more to the struggles of working on a dance line, but only succeeds at making it seem like a poor man’s version of A Chorus Line.

The romantic angle is uninteresting. Tony becomes attracted to Laura in the same way that he did with Karen Lynn Gorney, which was by watching her dance, which makes it formulaic and redundant. The Laura character is also quite kooky by constantly giving Tony the hot-and-cold act making her seem like someone with a split personality disorder. Jackie on the-other-hand is dull and catches on to Tony’s two-timing too quickly and then does nothing about it, which kills off any possible tension or drama. Tony himself is equally useless. Travolta plays him well, which is the only saving grace, as he manages create an engaging character despite the shitty way he treats Jackie, which normally would make him unlikable.

The scenes between Tony and his mother (Julie Bovasso) are touching and the best moments in the film although she’s played more like a real person here and not the comic caricature like in the first one. The garish set designs and special effects used to create the scenes for the play ‘Satan’s Alley’ at the end may be good for a few laughs, but it’s so over-the-top and campy that it degrades any serious intention that the film may have otherwise had. Watching the older audience members including Tony’s mother stand-up and applaud the play after it was over seemed disingenuous as I think most of them would in reality be rolling-their-eyes  and asking themselves ‘what the hell did I just watch’ instead.

The musical score, which was such a strong element in the first film, is completely lacking. Instead of a pounding soundtrack we get jazzy songs better suited for a quiet lounge. Absolutely nothing works except maybe inducing 93 minutes of boredom, which in that regards it does quite successfully.