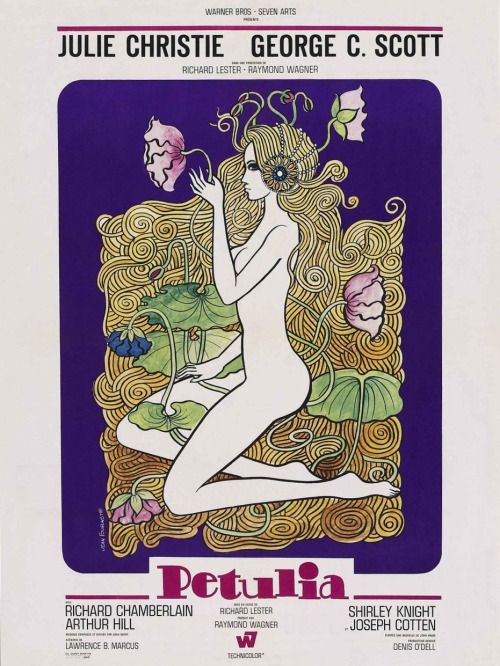 While attending a medical fundraiser Petulia (Julie Christie) who is a married rich socialite, decides to come-on to Archie (George C. Scott), a doctor who performed a life-saving surgery on a young Hispanic boy (Vincent Arias) that she brought to him a few months earlier. Archie is still hurting from his recent divorce to his wife Polo (Shirley Knight) and not sure he wants to jump into another relationship so quickly especially with a woman that behaves in such an eccentric way. However, her kooky personality and good-looks get the better of him and the two spend the night together. In the days that follow Archie learns of her abusive relationship with her husband David (Richard Chamberlain), but when he makes an attempt to help her get out of it she resists, which causes him a great deal of frustration as he is unable to get a good grasp on why she behaves the way that she does.

The film is based on the novel ‘Me and My Arch Kook Petulia’, which was written by John Haase who worked as a dentist and wrote his stories between his appointments. What makes this plot stand out from the rest of the romances is that it focuses on the chance meeting between two people who share an immediate attraction, but are unable due to various extraneous circumstances to ever get it into a relationship stage. They become like two-ships-passing-in-the-night and go on with their lives and even other relationships while quietly longing for ‘the-one-that-got-away’. Most movies portray romances where everything falls into line and works out while blithely ignoring the ones that get shown in this film even though these are much more common.

Director Richard Lester, who is better known for his slapstick comedies, shows an astute eye for detail and his fragmented narrative works seamlessly. I enjoyed the quick edits and color detail as well as the subliminal symbolism including showing the David and Petulia characters wearing all-white to display their sterile marriage as well as capturing David’s father (Joseph Cotton) sitting in front of a giant window that looked like a cobweb to help illustrate how he had entangled Petulia into his own personal web. The film, which was shot on-location in San Francisco, features great shots of the Golden Gate Bridge and the world famous cable cars as well as an interesting scene at the Jack Tar Motel, which has now been demolished but was famous for its ability to check customers into their rooms without the use of a live clerk, but instead through close circuit TV and a room key that would light up when the person passed by their assigned room.

The two leads give strong performances particularly Scott who for a change doesn’t play a character with a forceful personality, but instead someone who inadvertently gets bowled over by a woman who has an even stronger one than he. Even Chamberlain does well. Normally I find him to be quite bland, but here he is surprisingly effective.

This movie also marks the film debuts of many performers who are seen in brief, but quirky bits including: Richard Dysart as a virtual hotel clerk, Howard Hesseman as a hippie, Rene Auberjonois as a seat cushion salesman and Austin Pendleton as a hospital orderly. Members of the Grateful Dead get some funny moments while inside a grocery store and Janis Joplin can be seen onstage singing during the opening party sequence.

Romance fans will like this, but so will those living in the Bay area during the ‘60s as the city gets captured well. However, fans of that decade will also like it as it expertly exudes the vibe from the period and making it seem very real to the viewer even if they weren’t alive during the time it was made. Also, John Barry’s haunting theme nicely reflects the character’s mood and evasive film style.