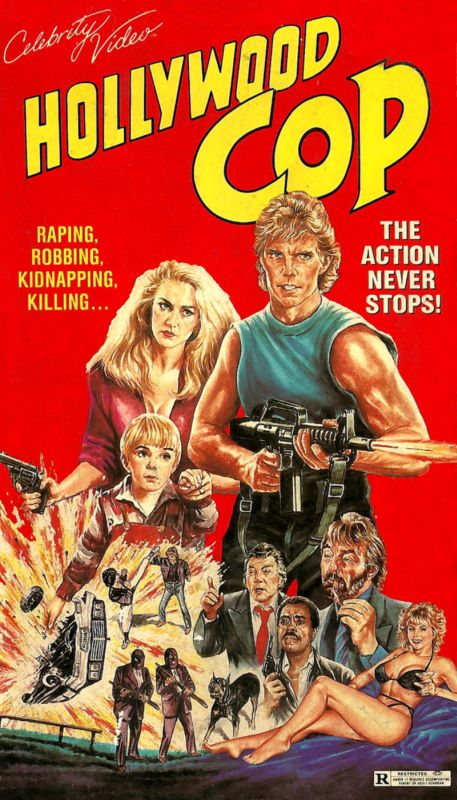 When Rebecca (Julie Schoenhofer) has her child Stevie (Brandon Angle) kidnapped by gangsters she finds that the police are of no help. Then she meets Turkey (David Goss) a cop that likes to work outside the system and he soon takes on the bad guys single-handedly even after it gets him fired from the force by his supervisor (Cameron Mitchell) who does not appreciate Turkey’s renegade ways.

A sleep inducing, run-of-the-mill action flick that was made to cash in on the popularity of Dirty Harry and the ‘Miami Vice’ TV-show with the Turkey character being a warped combination of Harry Callahan and Sonny Crockett. The plot is banal and the action redundant with a pounding, cheesy soundtrack that would be better suited for an ‘80’s porn movie.  Despite a few opening shots photographing Tinsletown’s iconic imagery the majority of the action take place in cheap looking backlots where the crew could film without having to get a permit and thus making the setting of the story and film’s title pointless as the whole thing could’ve just as easily taken place in Omaha, Nebraska and been just as effective or in this case ineffective.

The only thing that is slightly diverting is the casting of the small child who looks to be no older than five, but gets a major chunk of screen time and whose acting is far superior to that of his older co-stars. The scene where he has a ‘conversation’ with a Doberman that is guarding him and his attempts to ‘make friends’ with the animal can be considered depending on one’s perspective as being either endearing or laughably ridiculous. My only real complaint with him is the fact that he gets backhanded several times by the bad guys and even bleeds from the nose and mouth and yet he never cries. There is simply no way a young child of that age wouldn’t immediately break out into tears if they were hit like that and the fact that he doesn’t makes the already hokey scenario seem all the more fake.

Goss is terrible in the lead with his acting coming off almost as badly as his perm hairdo. Why the character is given such a stupid nickname as Turkey is never explained, but would’ve worked better as the film’s title instead. Schoenhofer is equally pathetic as the boy’s mother and her attempts at showing distress look more like someone suffering from stomach pains. I was also confused how an ordinary suburban housewife would be so adept at using a gun or expertly able to drive a speeding car during their chase with the gangsters.

Jim Mitchum, who is the son of the legendary actor Robert Mitchum and looks just like him, gets listed as the film’s star despite having very little time in front of the camera.

It’s hard to imagine how anyone even the most undemanding viewer could find this thing ‘cool’, or that the filmmakers actually thought there would be people out there who would like it. Good for a few unintentional laughs and that’s it although the film’s biggest joke is its opening title sequence in which every actor in the cast gets their name listed in a star on Hollywood’s Walk of Fame, which is funny since none of these actors could ever come close to getting their own star in real-life.