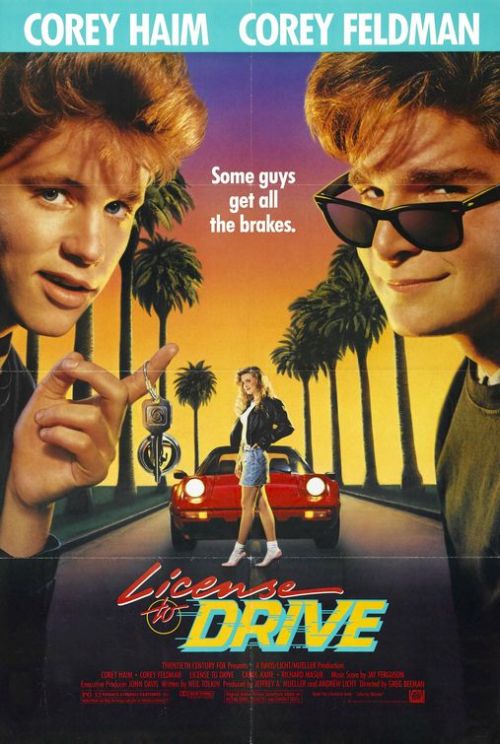 4-Word Review: Driving without a license.

Les Anderson (Corey Haim) is in a jam. He has flunked the written portion of his driving exam and therefore has his license denied, but a really hot girl by the name of Mercedes Lane (Heather Graham) wants to go out with him and he needs some wheels to get there. So, after his parents (Richard Masur, Carol Kane) have fallen asleep he decides to ‘borrow’ his grandfather’s car and chaos results, which forces him to return home with the vehicle in less than pristine condition.

This film was quite controversial when it was first released as it contains a scene involving an intoxicated man (Henry Allan Miller) getting behind the wheel of Les’s car and driving it, which critics felt was ‘promoting’ drunk driving, or at the very least making light of it. To me the biggest problem with the segment is the fact that the driver gets into the car with the keys somehow in the ignition even though Les and his friends are in the back of the car using those very same keys to open up the trunk, so unless they had two sets of keys, which is never stated, it then flunks the logic test. I also thought the scene where Les tries to jump from one speeding car to another while out on the freeway was just as dangerous and more hair raising than funny.

Haim in my opinion is the best thing about the film. I know he got the reputation of being a Hollywood ‘bad boy’, but the kid does have a certain appeal. This was his second pairing with Corey Feldman, who I didn’t like as much as he came off more as a crude ‘80s teen caricature. This also marks Heather Graham’s official film debut since her uncredited appearance in Mrs. Soffel four years earlier did not have any speaking lines and here she is terrific. I also found Masur and Kane to be quite appealing as the parents who resemble real human beings and not like the grown-ups in some ‘80’s teen movies where they are portrayed as being oppressive, overbearing, out-of-touch jerks.

The humor though is only mildly amusing and how the Les character could’ve missed the answers on the test is hard to imagine as they relied on basic common sense that just about anyone could’ve answered. The film also fails to have the same whimsical quality as Adventures in Babysitting which came out around the same time and had the same adventurous night-on-the-town concept.

If you’re looking for an amiable time filler for a slow evening than this may do the trick, but overall it’s just an innocuous ‘80’s teen programmer at best.