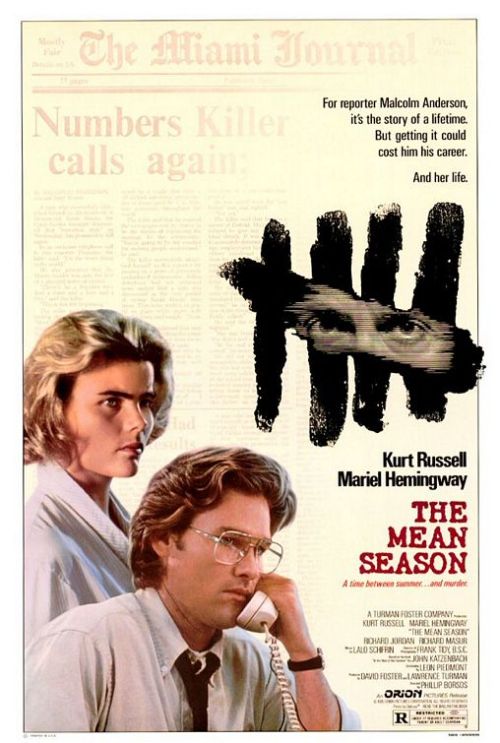 Feeling burned out from years of reporting on the local crime scene journalist Malcolm (Kurt Russell) has promised his girlfriend Christine (Mariel Hemingway) that he wants to get out of the business and move away to somewhere quiet and less hectic. Just as he’s ready to quit he gets a call from Alan Delour (Richard Jordan) the man who has been committing the recent killings that Malcolm has been covering in his newspaper. Malcolm sees this as a goldmine of information and thus delays his resignation. The two then begin a weird cat-and-mouse relationship until Malcolm becomes more of the story than the killer.

The movie starts out promisingly with a realistic look of the inner-workings of a big city newspaper. The film was shot during the overnight hours in the actual newsroom of The Miami Herald with Herald reporters used both as extras and consultants. Richard Masur makes for the perfect composite of a newsroom editor and I liked how the film shows the behind-the-scenes politics and the thin line reporters’ tow between reporting the news and becoming it.

I loved the on-location shooting done throughout Florida that helps bring out the varied topography of the state. Masur’s view out of his office window is dazzling and the climatic chase through the Everglades is exciting as is the speedboat ride in the swamps. The shot of a distant storm on the edge of an open field nicely juxtaposes the tension and dark story elements. The phrase Mean Season is actually a term used to describe a South Florida summer and gets mentioned in an early scene by a radio announcer as he is giving the weather report.

Russell is solid in the lead and it’s great and a bit unusual to see a protagonist who is not playing the nerd type wearing glasses. The segment where he jumps across a bridge as it’s going up and then watching him tumble down when he reaches the other side is well shot. Jordan makes for a good villain that manages to convey both a sinister side and a vulnerable one. Richard Bradford also deserves mention playing a tough cop that is at times quite abrasive, but also sensitive particularly in a couple of scenes where he comes into contact with scared children, which are two of the best moments in the movie.

The provocative concept has potential, but the film doesn’t go far enough with it. Instead of becoming this searing expose on journalism and the media it timidly steps back and turns into just another run-of-the-mill, by-the-numbers-thriller that becomes predictable, formulaic, and just plain boring during the second half and helps make this movie a big letdown.