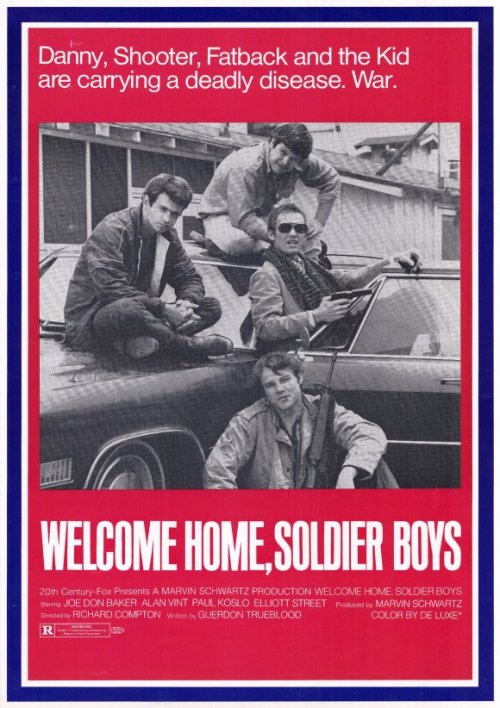 Four Green Berets (Joe Don Baker, Allan Vint, Elliot Street, Paul Koslo) return home from a stint in Vietnam. Initially they stop off at the home of one of the men’s parents, but find that none of them are ready to settle down, get a job, and play ‘within-the-rules’, so they set out on a cross country road trip, but when their car breaks down they end up paying more than they should for the repairs by an unscrupulous mechanic (Timothy Scott). This along with dealing with a society that does not seem to appreciate what they did for their country gets them angry. When they arrive in a small town ironically called Hope their simmering frustrations boil over. Using their army ammunition they go on a rampage destroying the town and everyone in it causing the National Guard to come in to try and stop them and creating for them a war zone all over again.

For a low budget 70’s flick this isn’t too bad. Richard Compton’s direction is slick, nicely photographed and paced well enough to retain a passing interest. The music, which features songs written and sung by actress/singer Ronee Blakely is okay and to a degree fits the mood. The script by Gordon Trueblood has believable dialogue and doesn’t seem intent on being purely exploitive.

Unfortunately the film fails to show much insight into the personality or experience of being a veteran. No flashbacks or discussions about it. In many ways these characters could simply have been regular, non-descript young men from any background who were not yet ready to enter into the adult world and take on adult responsibilities, which in the end is what makes this whole thing rather generic and its ‘statement’ more self-important than it really is.

Baker does quite well in the lead and although he sometimes gets a bad rap for his acting I’ve come to feel that it is unfair. The way his character here is so diametrically opposite from the one that he played in Walking Tall just two years later proves without a doubt that he is a talented thespian if given the right material.

Jennifer Billingsley though is wasted in a thankless role as a prostitute who rides with them for a little ways before getting thrown out of the vehicle at high speeds. Leonard Maltin incorrectly states in his book that her character is gang raped, which isn’t too true. She has consensual sex with one of the men, but then gets kicked out when she demands $500 for her services instead of $100 that they were willing to pay her.

The violent, climatic ending is the film’s most notorious claim to fame, but it takes too long to get there, lasts for only a couple of minutes and then ends too abruptly. It’s also absurd and outrageous to believe that these men would end up killing innocent people simply as a way to vent their anger at being cheated by a car mechanic. After all if everyone responded the same way when a car mechanic overcharged them then there would be no small towns left anywhere.