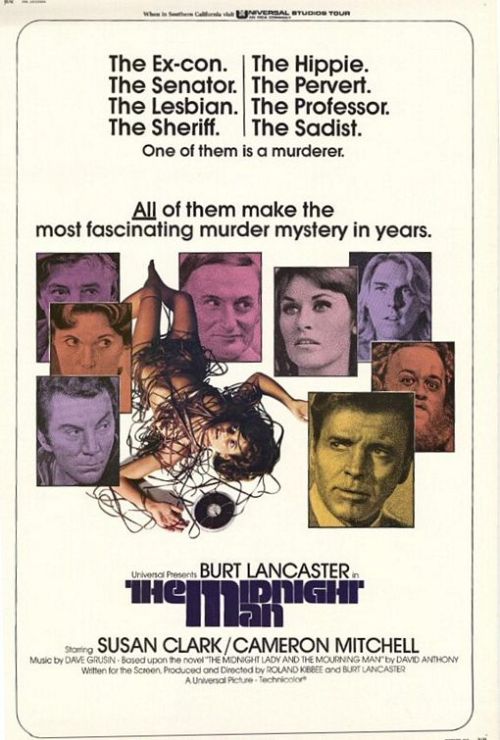 Jim Slade is a 60-year-old out on parole after serving time for killing his wife’s lover. He finds a ho-hum job as a security guard at a local university and soon gets swept up in a murder mystery when a coed (Catherine Bach) is found dead. The local cops nab the town pervert (Charles Tyner) and take him into custody, but Slade is convinced they have the wrong man and goes on a crusade to find the right one only to realize that there are far more suspects than he initially expected and no one no matter who they are is quite innocent.

Many critics at the time and some viewers complained that the mystery was too involved and a bit confusing however I was able to follow it and it manages to remain intriguing enough to be entertaining, but it’s still no better than an average episode of Columbo. The film also doesn’t have enough action although the part where Lancaster finds himself trapped in a rural barn and must use whatever implement he can find to fight off a trio of rednecks and their ferocious dog is nifty.

On the technical end the film is a bore and looks unsuitable for the big screen. Writer Roland Kibbee in his only directorial effort shows no flair for visual style filming scenes in places with dull and ordinary backdrops and fails to capitalize on its South Carolina location where it was shot. The soundtrack though by Dave Grusin is distinctive and the one thing that shows verve, energy and I wished it had been played more, particularly the part at the beginning.

Lancaster, who also co-produced and co-wrote the script, walks through his part in an almost comatose state and the fact that his character seems so very on-top of his game in this investigation leaves little doubt in the viewer’s mind that he will ultimately solve the case, which isn’t as interesting. For a character that is so savvy he does make one glaring error when he finds a dead body in his car and fearing that he will be fingered for it decides to put the body inside a nearby hotel room, which seems foolish. For one thing to check into the room he would have to have faced a hotel clerk who could’ve easily recognized him for the police later and he also doesn’t wear any gloves leaving his fingerprints all over the room when simply dumping the body in a wooded area would have made much more sense.

Out of the entire cast Cameron Mitchell shows the most energy and it certainly is fun to see Bach in her film debut and years before she became Daisy Duke playing a foul-mouthed, snippy college student. Although she has no nude scenes there is a painting of her naked likeness shown at one point, which may be good enough for some viewers.