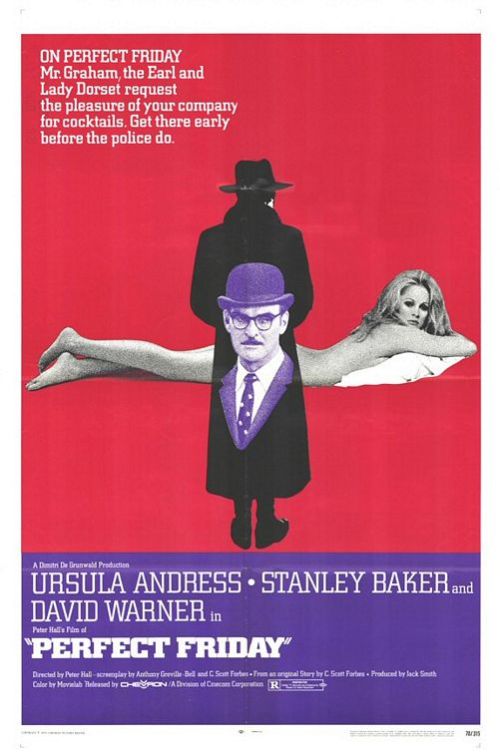 This uniquely structured and offbeat sleeper details an elaborate bank heist where staid bank employee Mr. Graham (Stanley Baker) uses his inside knowledge to pull off an ingenious robbery. Unfortunately he is dependent on the oddball couple of Nick (David Warner) and Britt (Ursula Andress) to help him.

This film is probably more of a kooky character study than it is a heist flick. The three characters are intrinsically different from each other and their constant bickering, feuding, and interplay are a treat. In fact they never get into the actual robbery or even the details of it until the last forty minutes.

Baker is fun in the lead. He is the perfect caricature of the stuffy British businessman. His contained pomposity and cryptic deliveries are right on-target. Warner makes for a good contrast. He is lazy and undisciplined with a tendency to wear outrageous looking outfits. It is interesting though that he can get serious when he needs to particularly during the crime itself.

Andress is the scene stealer and this is a perfect role for her limited acting abilities. She plays a greedy woman prone to outrageous extravagance and indulgence even if she lacks the funds for it. Her caricature of the materialistic woman gets taken to the extreme and is hilarious. In most cases she would be disliked, but here her beauty and innocuous way she delivers her lines make her amusing instead.

Director Peter Hall seems to pride himself on making it offbeat and full of many twists and succeeds most of the way even with his use of the glass offices that the bank employees have to work in. The robbery itself is intricate and believable and full of mounting tension. The film’s only real problem comes with its ending that is too abrupt and in many ways almost like a cop-out. There is such a fun chemistry between the three characters that it really could have been played out much more.