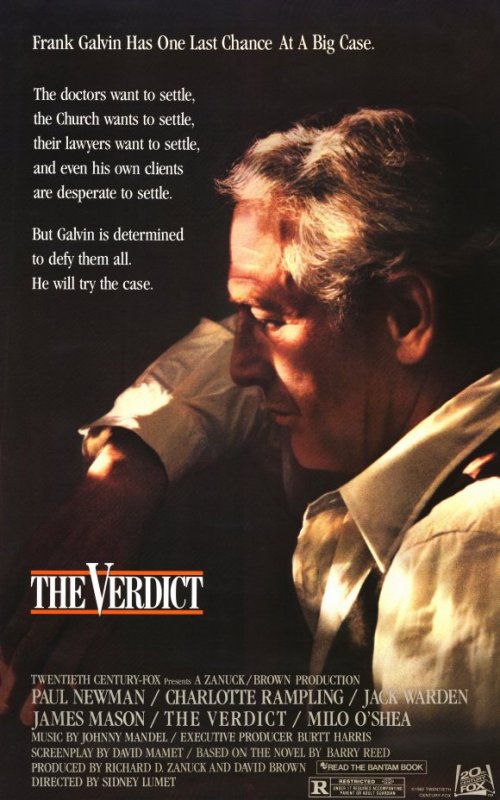 Frank Galvin (Paul Newman) is a lawyer that has hit rock bottom. He has lost his last four cases and become an alcoholic in the process. His associate Mickey (Jack Warden) hands him what appears to be an open and shut case dealing with a woman who was put into a permanent comatose state after being given the wrong type of anesthesia during the delivery of her child. Both parties are willing to settle out of court and Frank is initially happy to accept the settlement as he is hard up for funds, but after seeing the sad condition of the patient in the hospital he changes his mind.  He becomes convinced that the hospital is trying to hide something, but the other doctors and nurses that where present during the procedure are refusing to talk. He then tracks down the admitting nurse, who was the one person who refused to sign a sworn statement relieving the doctors of any wrong doing. Once he finds her it blows the case wide open.

This marked a turning point in Newman’s career. He was no longer the young, shirtless, virile hero, but now a grey haired, gravely voiced man showing the signs of aging and his roles from then on where all of older characters past their prime. Newman definitely looks tired and washed up and it is so effective that it makes the viewer feel the same way. Yet, he is still able to show the boyish side of his character by way he becomes engrossed with the pinball machine at the bar and getting excited when he achieves a high score.  Newman continues to be one of my favorite actors and his ability to act in a way that seems so effortless never ceases to amaze me. It may seem minor, but I liked when Galvin is forced to take a red-eye flight out of town in order to meet the former admitting nurse (Lindsey Crouse) who has moved to another city, he is shown to be unshaven. Too many times male characters placed in hectic scenarios in most films are clean shaven at all times even when it doesn’t make sense. Yet here Newman’s character isn’t. Being the consummate method actor who was always looking for realism I’m sure he decided to add this extra touch himself. Sometimes what separates the great ones from the average are the little things.

Director Sidney Lumet shows why he is a legend as well. The movie was shot in the late autumn, early winter in Boston. The cold climate and gray skies help accentuate Galvin’s state of mind and stage in life. I remember hearing Lumet state in an interview how he made sure that the color schemes in the entire film where of a dark, brownish color which he felt would reflect the story’s serious tone. In fact the color brown is the one quality I remember most of this film from when I first saw it years ago. I also liked the visual touch Lumet uses of having Frank taking Polaroid pictures of the victim lying motionless in her hospital bed. As the viewer watches the images of the woman on the Polaroids slowly develop it perfectly reflects Galvin’s developing empathy for her. My only quibble is that I wish that Lumet had shown a close-up of the woman so we the viewers could completely take in her sad condition as well. We are only shown the victim from a distance and even then it is never straight on, which doesn’t help us become as upset by her quandary as we should have.

Another thing I appreciated about the script, which was written by David Mamet and based on the novel by Barry Reed who was at one time a practicing attorney, is the fact that is focuses on all the behind-the-scenes tasks that a lawyer must do before the case comes to trial. Most courtroom dramas deal almost exclusively with the trial portion, but here we see how the attorneys prep their clients for questioning and cross-examination. We also take in the process of them interviewing potential jurors, researching legal issues, chasing down witnesses, and even discussing potential strategies with their clients. I found the approach here, as opposed to other legal dramas, to be more thorough, revealing, and satisfying.

The grievances that I had with the film all contain spoilers, so if you are interested in watching this movie then you may want to skip the next two paragraphs.

The first problem I had was with the Lindsay Crouse character who plays the admitting nurse whose bombshell testimony turns the tide of the case in the favor of Galvin’s client. Her scenes are certainly riveting and marked with all the classic ingredients of high drama. Her character states that the admittance sheet that she had filled out that day had been altered by the doctor and that she had the original. Yet neither the viewer nor the jury is shown the original making what she says, as compelling as it may be, seem like hearsay. The judge also orders everything that she said to be stricken from the record and not considered when the jurors come to their final decision. Yet the jurors openly ignore this order and side in Galvin’s favor anyways, which I couldn’t completely buy. I didn’t think all twelve of them would disregard the judge’s order especially when no documentation was ever shown to help verify what the witness stated.

I also did not like the Charlotte Rampling character who plays a woman that Frank meets at a bar and begins to date. She is also paid by the opposing attorney Ed Concannon (James Mason) to spy on Frank and give away all his strategies. I didn’t feel it was necessary to show this, or even bring in the character at all. We are already shown earlier that Concannon is underhanded by the way it is implied that another doctor, who was going to be the star witness for Galvin, was paid off not to testify and then just disappears. Having him go further by using Galvin’s girlfriend as a snitch seemed like over-kill. The movie strives for realism and therefore should keep extreme side-story scenarios like this out of it as I am sure it is not something that occurs every day.

The subject matter is serious and somber. On a dramatic level it is excellent and although some may find it slow and depressing others will appreciate the intelligent script and deliberate pace. It is also an unusually quiet film with long stretches with no dialogue, or music, which is a nice change of pace from most films, which feel it necessary to be loud and noisy, or risk losing the audience’s perceived short attention span.