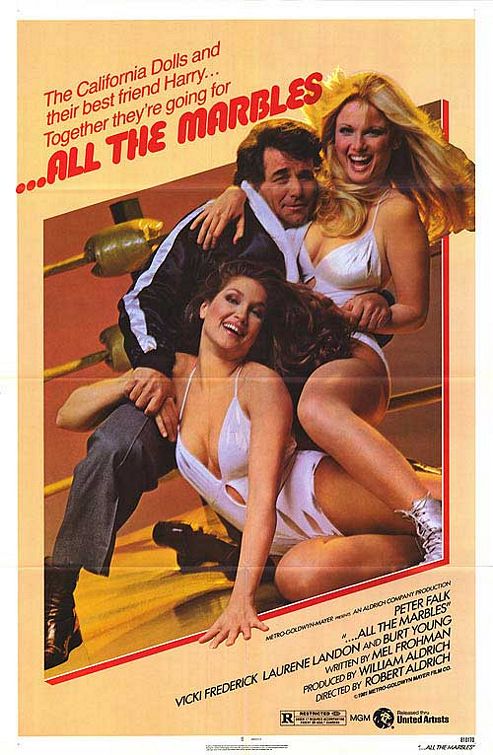 4-Word Review: These wrestlers are hot.

Peter Falk does another terrific job playing a lovable, but eccentric character. Here he takes on the role of a con-man type manager of two lady wrestlers (Laurene Landon, Vicki Frederick).

This film marked the final project by director Robert Aldrich who did such classics as Whatever Happened to Baby Jane, The Dirty Dozen, and Kiss Me Deadly. Although it didn’t do too much on its initial release, it has since acquired a small, but fervent following. These people insist this is the best movie about wrestling and some even go as far to say it is the best sports-themed movie ever. Warner Brothers has become aware of the attention and has now added it to its special-order DVD collection that can be purchased for twenty-five dollars from its archive website.

I remember when this film was released and after seeing the previews I was convinced it was just a mindless T&A picture, but I have read about enough people who have liked it that I decided I needed to give it a view. However, I came away from the film unimpressed with the majority of it. The main problem is that, although labeled a comedy, they stick in some awkward drama in order to show the downside of the wrestling profession. It doesn’t work because the two women playing the wrestlers can’t act. Landon in particular is a problem. She plays the blonde half and has an annoying monotone quality to her voice making her sound like she is simply reading her lines straight off of the script. Both lady characters seem to react to everything in predictable ways and thus become boring. The scenarios and conversations are soap opera like and end up bogging the whole thing down.

I like the attempt at showing the gritty side of the business and even inserting some realism, but this could have been down in a satirical form while still keeping it consistently funny.  A film like Smile from 1975 made some trenchant comments about the beauty pageant business, but remained funny and clever throughout without any of the strained drama like here.

Now with that said, I can still see why this film has attracted some fans and that is based solely on the wrestling scenes, which are excellent. The two actresses were trained by Mildred Burke a famous female wrestler from the 30’s and 40’s.  The techniques they use are true to form and look very authentic and, at times, even painful. Aldrich captures the action from different angles and it is fast and furious. I am no wrestling fan, but found myself caught up in it. The wrestling scenes are without question the best part of the film and there should have been more of them. The climatic match closely resembles the Rocky formula and it is a lot of fun. The highlight here comes when the two women attack and beat-up the crooked referee (played by Richard Jaeckel).

I must also mention that I like Burt Young as the heavy. He gives off one of the creepiest, weirdest laughs you will ever hear.  It was alsogreat to see legendary Los Angeles Lakers announcer Chick Hearn as the ringside announcer during the final match. He even ends up saying the film’s title.