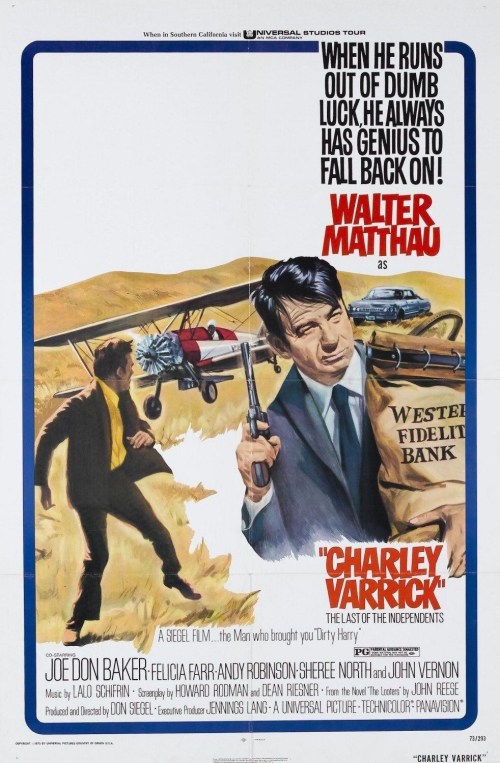 4-Word Review: Charley outsmarts them all.

Charley Varrick (Walter Matthau) is a crop duster and former stunt pilot who in order to make ends meet robs small banks in and around the state of Nevada. He does this with the help of his girlfriend Nadine (Jacqueline Scott) as well as a young, quick tempered man named Harmen Sullivan (Andrew Robinson). Unfortunately the latest bank that they rob was a front for the mob and the money they take was already stolen cash and the mob is soon hot on their trail as are the police. Worse is the fact that Charley and Harman don’t seem to see eye to eye on anything, which leads to a lot of intense confrontations and intrigue at every turn.

Initially I felt Matthau may have been miscast. We are so used to seeing him in comedies that watching him in a movie that features gritty violence seems almost unsettling. However, as the movie wears on and the story gets more intricate I started to really enjoy Matthau’s character and felt he was a perfect fit. I loved how he is so laid back and unassuming and yet in his own subtle way still manages to outwit everyone, even the dangerous mob. The film definitely feeds off of the confrontations between Charley and Harman who are diametrically different in every aspect. The fact that Charley manages to get the upper hand on the otherwise violent prone, out-of-control young man makes it all the more pleasing.

Robinson again gives another outstanding performance. The guy is an amazingly intense actor, who has never been given his just recognition. The guy stole the film in his most famous part as the killer Scorpio in Dirty Harry and he practically does it here as well.

Woodrow Parfrey another unfairly over-looked character actor gives a delightful performance as the timid bank manager stuck between the mob and the police. The conversation that he has with the mob boss Maynard Boyle (John Vernon) out near a cow pasture where they ascertain that the cows may have it better in life than the humans is memorable.

The only actor that didn’t quite hit the mark with me was Joe Don Baker as the mob hit man named Molly. I liked the character who was this extremely cold, calculating killer smoldering underneath his calm façade with a nasty penchant for violence and sadism as well as an odd moral code. Baker seems to be having a lot of fun with the part, but I would have liked the character to have been bigger physically and a few more scenes showing just how mean and threatening he really was. Although politically incorrect to the extreme the scene where he ‘convinces’ the Sheree North character to go to bed with him is amusing.

The cinematography seems to be lacking. Nevada can be a scenic desert state if captured right, but that wasn’t done here. The majority of the action takes place in a dusty trailer park, which is expectedly bland visually. The bank that was chosen for the opening sequence was very ordinary as was the locale. I think they should have scouted around for something a little more exotic as the opening shot should always be something that should grab the viewer in and that certainly didn’t happen. Despite being directed by the legendary Don Siegel this whole thing had a little too much of a TV-movie look.

Another beef I had with the film is the segment where Charley goes to bed with a woman named Sybil Fort (Felicia Farr) who is the secretary of the mob boss that Charley wants to get into contact with. Charley barges into her apartment after disguising himself as a flower delivery man and then threatens to harm her if she screams. Then, just a little while later they go to bed together and she behaves like she has suddenly gotten really ‘in’ to him. I know in the post-sexual revolution 70’s and in Hollywood’s effort to always seem ‘sophisticated’ and ‘relevant’ it was common for characters of the opposite sex to go to bed together even if they had just met. Sometimes though this ritual seemed to border on the absurd and this scene here was a perfect example. This woman had no idea who this man was and who had threatened her just a short while before. Also, Matthau does not have the face or physique that most women are going to get the ‘hots’ for. My only guess is that this was meant to be an inside joke since Farr in real-life was the wife of Jack Lemmon and therefore they thought it would be fun to have Matthau go to bed with his best friend’s wife and also possibly live out a private fantasy. Either way it came off as dumb and forced.

Despite all of this it is an entertaining and fun movie especially for those who enjoy a story that emphasizes a clever battle of wits. A remake wouldn’t be a bad idea if it could give it a little more visual flair and a slightly better choreographed action.